On Wednesday, France’s Carven and Belgium’s Raf Simons — who  created his collection in tandem with US artist Sterling Ruby — hit the runways  in some of the most beautiful places in Paris , in the National  School of Fine Arts or near the Place Vendome, the epitome of luxury. US designer Rick Owens, along with Louis Vuitton, Japan’s Yohji Yamamoto and Dries Van  Noten will show on Thursday and the Dries Van Noten show is one that I am really looking forward to!

There is a growing desire for men to now buy clothes because they want to stay in touch with fashion and trends and not just out of necessity which is seeing fashion week events and collections for men increase as happens in Paris where it is now a 5 day event from the 3 day event it was a couple of year ago.  In a more fashion conscious world we are beginning to see me become more adventurous and with suits not being the main mode of dress in many work environments these days the options and choices are limitless and getting really exciting.

Now some of the more cutting edge and emerging designers are taking centre stage and pushing the boundaries on what we used to see on the catwalks in Milan, London and Paris as men become more interested in difference in the clothing choices they make and not to just look like each other all the time.  This is an exciting step forward and now if only we could talk more Perth men into expressing more of their own personal style!

And so to the shows that had an impact for me on day 1 in Paris. Haider Ackermann www.haiderackermann.be did not disappoint with his elegant, slightly dishevelled collection. This men’s collection, summoned a contemplative mood that felt like you were part of a 19th-century literary society. The models meandered about an industrial space in the Marais looking thoughtful,  sipping mulled wine. 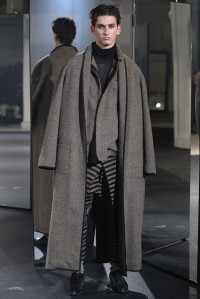 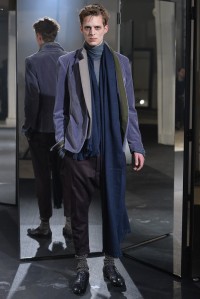 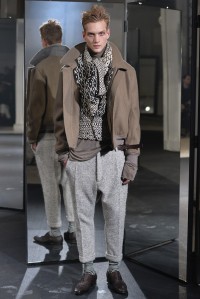 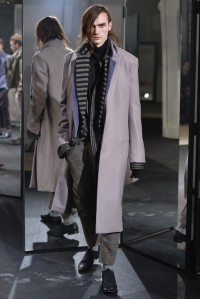 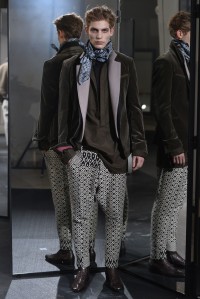 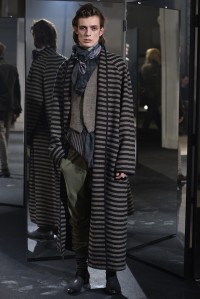 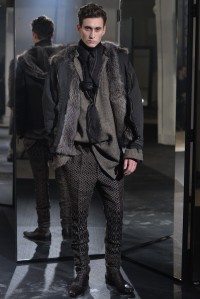 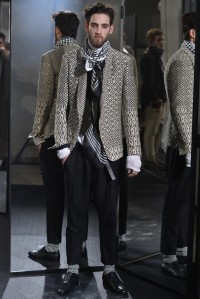 The collection was elegant and romantic.  Rich, textural fabrics  were piled on in Ackermann’s inimitable layered style and you know how much I love layering for men!

Overcoats were enveloping and more like a robe in appearance but worked with the layering, their proportions amplified by the pants that tapered and ended snugly at the ankle. In the past 2 weeks we have seen scarfs in many of the shoes and Haider added to the look with scarfs wound around the neck creating a finishing touch to his looks.

The colour palette was all greys, blacks and geometric patterning as well as stripes that all added together to give each look its own distinct edge whilst also pulling the collection together.  Added in was a couple of female models just to give the parade yet another dimension.

The collection was inspired, artful and creative and the layering was fantastic and imagined.

Valentino www.valentino.com  however, who have just launched their first flagship men’s store in Paris, also went with oversized robe like coats but added to the mix with suiting that seemed inspired by pajamas and not classic suit style.  The colour palette was lush and luxurious with camel, greys, blues and plum giving a distinct Valentino look from creative directors Maria Grazia Chiuri and Pierpaolo Piccioli. 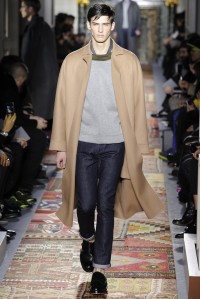 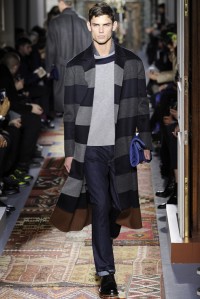 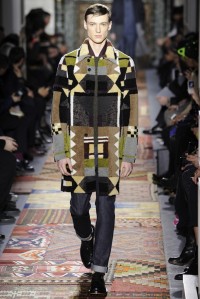 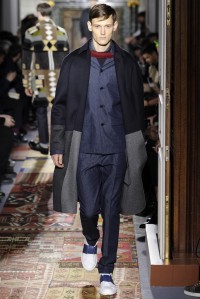 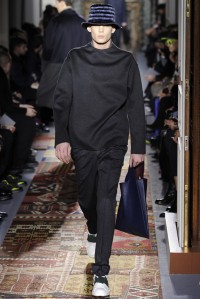 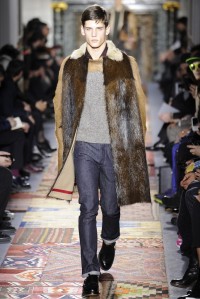 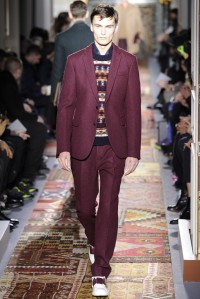 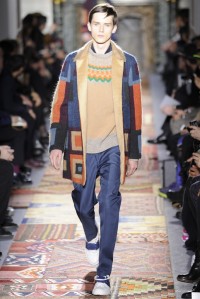 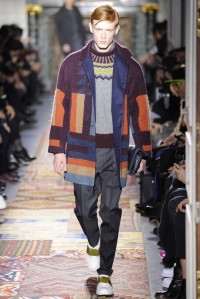 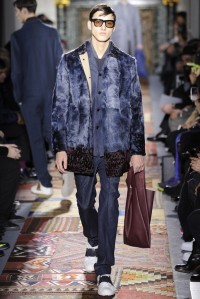 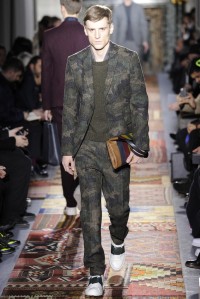 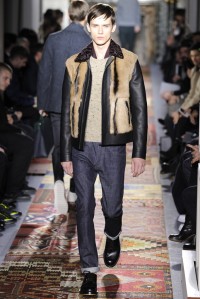 The suits were further dressed down with the now famous Valentino sneaker and even the herringbone designs took on a different edge when paired with sneakers…playing into the chic casual look and giving yet another option to want to wear a suit but in a more laid back way!

The catwalk was laid out with kilim inspired rugs that added yet another point of difference to the show.  The coats presented were all hand-made and probably will not make it into my wardrobe but I could appreciate and wonder at the workmanship and exquisite detailing and the use of lux fabrics and embellishments that created really sumptuous pieces.  There was  casual elegance on show here with their take on denim that extended to jackets as well as jeans – and again with the Valentino price tag to match.

This was a delicious showcase and a delight from when the first model came into view right up until the final…another triumph for Valentino and its creative directors.