Back with another day in London and another favourite of mine. Tom Ford www.tomford.com usually grabs the headlines wherever he presents a collection because he always manages to create a collection that is the envy of others and is ever evolving whilst staying true to his clean lines and exquisite tailoring and this women’s wear collection was no different. 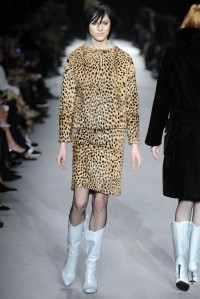 After making is London runway début last year with a collection that was filled with beads, fringing and lots of colour this collection went in an opposite direction with a more refined, muted palette of colours (although there was also the odd splash of red and the included furs were colourful and stylish) and showed just how creative and complete a range could be. 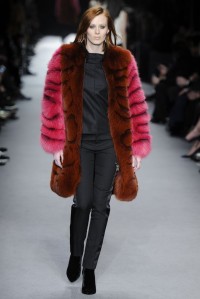 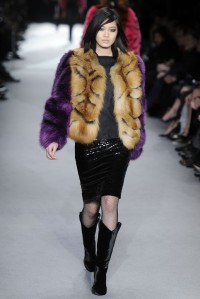 Last year was all about statements and lots of everything and this collection was all about the tailoring, the fit and setting trends for the coming season.  All of which were done with Fords usual panache.  This was a strong line up from the very first outfit presented up to the every end and one that will have any woman who wants to look her best always happy with what was on show! 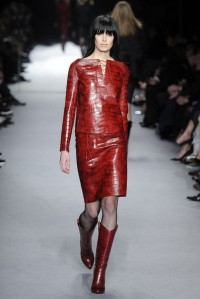 From the velvet shift that opened the show to an austere black cashmere felt gown with built-in poncho that highlighted Fords craft and styling to the nth degree. Boots featured in the looks and added a wild west twist that worked incredibly well.  This was matched with a 60’s feel for some of the outfits and they all ran together to create a complete show of incredible style. 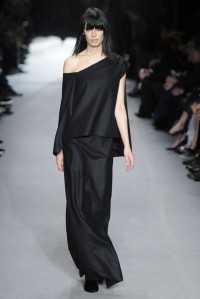 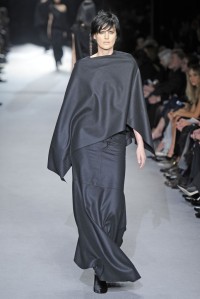 Floating, yet tailored to perfection!

This was all about lux fabrics from soft leather  to the simple wool tunics and tops with necklines that were either slashed or lace-up.  Simple some of it may have been but there were also stand out pieces with exuded colour, style and a must have attitude which saw a stunning  red croc skirt suit with boots to match.

But it was Ford’s sparkling dress bearing the number 61 — “My year of birth,” he said with a groan that got everyone talking.  It’s actually his take on the $65 counterfeit Ford football jersey that Jay Z has worn to perform in stadiums and he did it better and with sequins. Take that Jay Z! 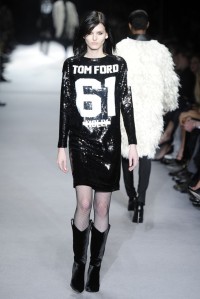 And now for something completely different in London. This season it has to be said has seen the return of a bohemian theme of various stripes  on the London catwalk, with varying degrees of success. Osman Yousefzada www.osmanstudio.com was just one of the city’s designers who turned to Bohemia for inspiration (the use of colour and art infusing his looks), and for his collection he took the late Talitha Getty as his muse and inspiration. 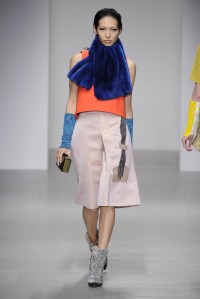 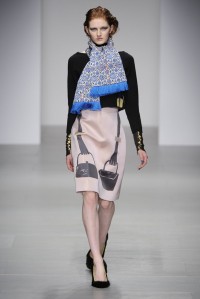 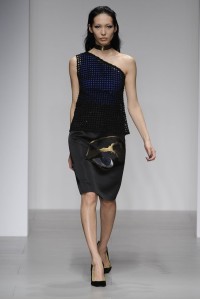 The collection was filled with bright furs and brocades.  The brocades were worked in motifs based on exotic wall tiles and abstract Cleopatra eyes and trompe l’oeil designs of long bracelet-clad arms holding clutch bags, which was inspired in its presentation. One of the brocades came in cobalt blue , which Yousefzada used for coats and sleeveless shifts in another tilt to a  Sixties feel. The arms-in-bracelets design appeared on a faded pink  shift and his clever use of patterns all mixed together to great effect.

Coats were shown in a beautiful patchwork of cobalt and electric blue fur, and a cape shape was done in black sheepskin which all added to give this collection a cohesive Bohemian feel and it was a joy to behold.

One thought on “Tom Ford returns to up the ante with his RTW 2014 Autumn collection – oh and Osman Yousefzada goes a little Boho!”