It was just a few months ago that I received an email message from our gorgeous freind Zac about his approaching birthday and the options for getting a gathering happening as he was in LA and his family and lots of his freinds were based in Australia.

After some breif discussions a location was decided on and so just 2 weeks ago the journey to gather together in Phuket was under way and for Trevor and I it meant a 3 day stop in KL and a post Phuket 3 day stop in SIngapore following a cancellation of our AirAsia return flight that meant an extra day in KL and a midnight flight to Perth…and if you know me I just hate flying overnight if I can help it. So after some online checking it was home via 3 days of SIngapore and Jetstar flights that would also include frequent flyer points…not so bad really.

There will be other posts in the coming week, before we once again head off on another trip, this time to Bali for a couple of weeks that will look at different aspects of the trip and the wonderful members of Zac’s family that we got to spend some time with whilst in Phuket but I thought that I would focus on the three very different hotel experiences that this holiday comprised that were so very different in many ways.

Both Trevor and I usually like to stay in at least 4 star hotels, if not 5, at our stage of life, being in our 50’s now we like the creature comforts and to spend time comfortably and with at least some sense of style.  Each of the destinations for this trip comprised of hotels that according to our homework are rated 4 stars and offered a range of different amenities and facilities that on paper looked really quite similar but in reality were sometimes miles apart in what they turned out to consist of.

So lets start at the beginning and work from there…on arrival in KL we made our way by high speed train into the city and then transfered to a taxi for the short ride to the Corus Hotel.  Now to begin with we had booked an Executive room on the Club Floor that included dedicated check in, club facilities that included breakfast, pre dinner cocktails and finger food every afternoon and were located on the top floor of the hotel.

And then there were the negatives for this hotel, the room was more of a 3 star level with worn furnishings, carpet that was coming up at the edges and mould in the bath tub and shower area (I really expect clean bathrooms and complained and had the bathroom cleaned but that did not make much difference at all) Then there was the food – pedestrian is being kind and certainly not of a 4 star standard either in the Executive lounge or the main dining room which we decided to check out on our second day after the poor offerings on the first day on the Executive floor.

The range, freshness, service and amenities all let the dinning experience down and just added to a really warn out, tired feeling about the hotel as a whole.  But did I mention to location, this made up for on some level for the bad qualities of this hotel because it mean shopping, dinning and sight seeing were on our doorstep and easy to get too at any time of the day or evening.

KL is still a great place to shop and eat and I will devote another post about dinning and shopping and even the fashion in each of my destinations for this trip (well Phuket is never going to be a fashion stop as you spend most of your day walking around in shorts, singlet or for some just bathers at any time of the day or night and it is not really a fashion destination!),

After the interesting expereince of the Corus Hotel in KL it was onto the Novotel Resort and Spa in Karon Beach, Phuket for 7 nights of resort accommodation and some real rest and relaxation and to celebrate Zac’s 30th birthday.

As we had not been to Phuket for a number of years and not having had a particularly good memory of the full on experience of Patong I was hesitant about what this part of the trip would hold.  A number of people had suggested that we look at a resort that was out of Patong and if we did that we would have a better time (thanks Sally for that tip!) and how right they were.

Karon Beach is only 10 minutes by tuk tuk (the best way to get around in Phuket) and the cost of the trip into Patong to be amongst the tourists and restaurants in only $4 each way so the short trip was always easy to arrange and cheap to make it!

But now to the resort – we organised for the Novotel to collect us from the airport becuase we were not sure about transfers and wanted to make it as easy as possible when we landed and easy it was.  The time from when we walked off the plane until we were in the car on our way to the resort was about 40 minutes which was fantastic.  Then it was 45 minutes in the car and time to arrive and check in to our resort expereince.

What a difference from our 4 star Corus experience!  The Novotel from the minute that we stepped out of the car until we headed back to the airport a week later was first class all the way and was easily 4 star if not approaching 5!

We had booked a suite at the Novotel and were duly shown through the resort to our wonderful large suite experience.  Whilst it was all open plan and Trevor would have like a seperate lounge area, it did not worry me and there were three distinct areas and a huge outdoor balcony that ran around the room and then there was the bathroom with the double sinks, large rain water shower and large bath tub and not a bit of mould in site.

To be fair the Novotel is a much newer hotel but it was head and shoulders above the Corus  There were three swimming pools (Corus had a rather run down one), one of which was just outside the door to our suite and really quiet, a kids pool and the larger resort style pool which was great to people watch at and just relax by on one of the over the water sun beds (if you got down early enough to nab one, we never seemed to miss out and enjoyed them most days that we were just sunning and enjoying a good relax).  Later in the afternoon some time by the pool outside our room was just perfect,  There were only 15 sunbeds around this pool and this made for a nice tranquil relaxing experience later in the day.

The Novotel didn’t have a Club Floor but really it was not necessary as this was a resort and there were plenty of places to find some quiet time if you needed to.  The food here was also of a much higher quality with the breakfast food just superb and the staff were welcoming, accommodating and freindly at all times of the day.

Whilst here we also chose on a number of occasions to eat at Tai Restaurant which was a small spot, again a few steps from our room that offered mainly Thai food and other asian inspired cuisine.  This was one of my favourite dining experiences in Phuket with some of the most divine Thai food on offer, from the prawns in lemongrass to the traditional Pad Thai Goong it was a delight.  We neded up eating there 4 times over 7 days and that is really unusual for us as we would normally head out and explore local restaurants and offerings but the ease of lcation and the quality of the food made it hard to go past.

The facilities, the staff, the food, the room, the pools and the feeling of being welcomed and part of the resort made this a stunning venue for a weeks stay.

You would never come to Phuket to shop but I will talk more about that and the food in another post in the coming days as I metioned before.

And finally for Singapore and our stay at the Carlton Hotel.  Another 4 star hotel and again this time we decided to stay in a room that gave us access to the Executive Club (or Premium Club at the Carlton) and this was like comparing chalk with cheese.

From the moment we stepped out of the taxi (after only taking 30 minutes to get through customs and passport control – aaahhh if only Perth was like that) we entered a stunning hotel that offered everything that we expected from a 4 star experience and a stay in an Executive Club room.

The room is comfortable, clean and the bathroom is well maintained and the shower is a real delight….after having to climb into the bath to have a shower at the Corus (I forgot to mention that earlier) this is a rain water shower with the whole bathroom being made up of marble from floor to ceiling and first class amenities.

The Premier Club is well appointed, stylish, comfortable with great views and even the food is fresh, delightful and the staff are efficient and professional in that very Singaporean way.

The pool and the surrounding areas are simple but offer a great pool that is chilled, well maintained and as many peole in Singapore don’t generally sun bathe it made for a pleasant exereince when we spent a morning by the pool having a final wind down before we face the flight home.

The Carlton is a wonderful hotel that is truly worthy of the 4 star title, I especially loved all the artwork dotted around the hotel that just added to the expereince here. And then there is the shopping, but more on that later…I will however say that Singapore is not a cheap city but the locals I saw around the shops we visited were all well dressed and some of the women were dressed immaculately from head to toe in designer outfits and looked like they just stepped out of the pages of Vogue.

So there you have my reviews of the 3 spots we stayed at…all 4 star buyt all different in many ways.  In summary, if I went to KL again I would look for something in the same area but woud choose not to stay at the Corus again, however I would not hesitate to stay at either the Novotel Karon Beach in Phukket or the Carlton in Singapore, they were both fantastic and provided fabulous facilities, food, rooms and the staff were great too!

Food and drink in KL and not at the Corus Hotel!

Just some random spoons hanging in a restaurant in downtown KL.

And then there was Phuket and the delightful Novotel Resort and Spa Karon Beach! 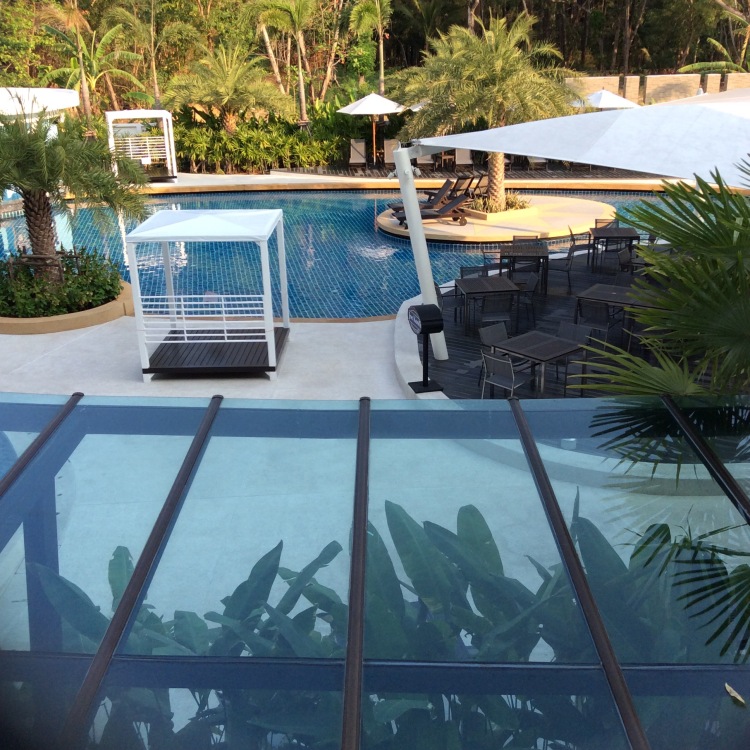 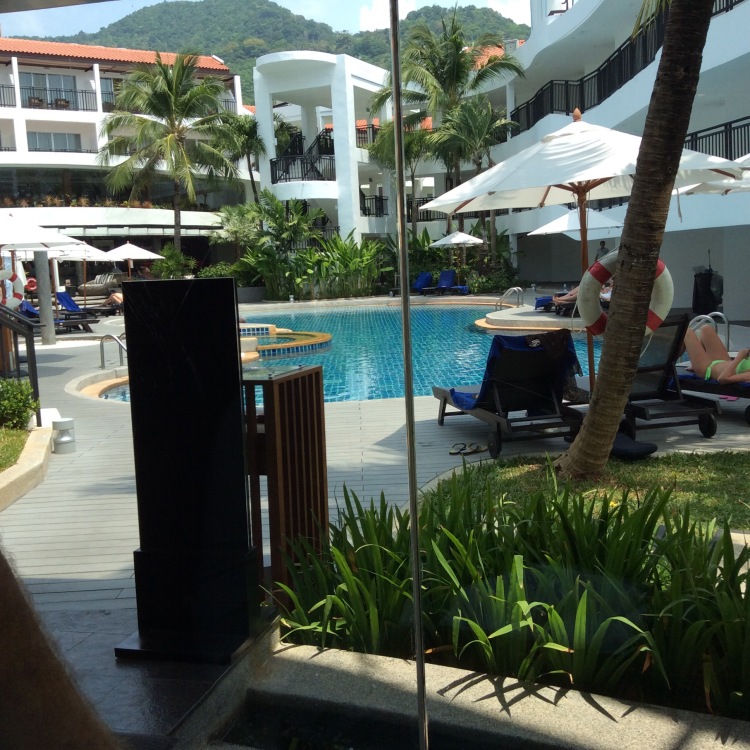 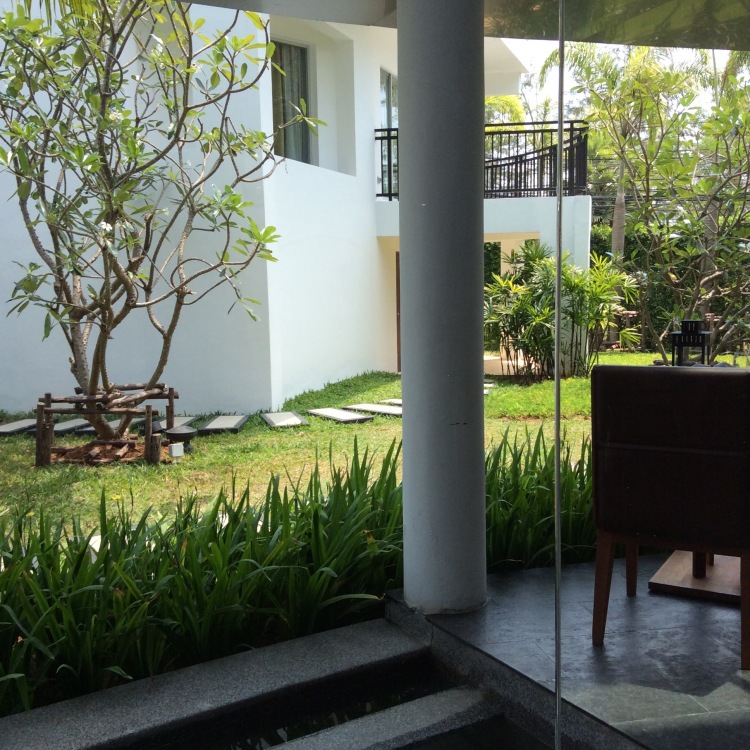 The view from Tai restaurant were we enjoyed 4 great lunches!

The prawns with lemongrass = sensational!

A Thai seafood dish with a Mojito = perfect lunch really!

And finally Singapore – the view from our room at the Carlton Hotel!

The artwork around the hotel was interesting, inspired and fun! 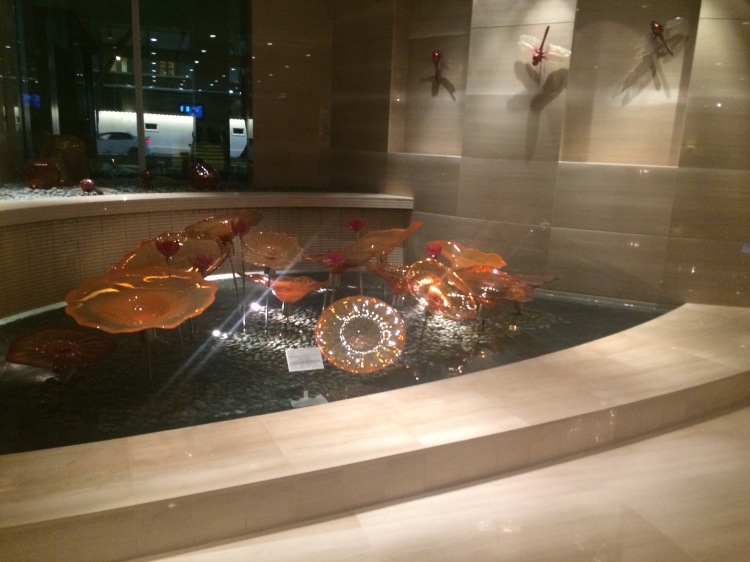