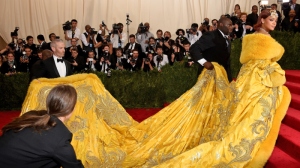 Every year the Met gala ball never fails in its ability to showcase some amazing clothing, amazing moments on the red carpet and some over the top creations that would not necessarily see the light of day on any other red carpet, and this year was no different.

With a new exhibition China – through the looking glass the theme and inspiration for the night was clear and those attending did not fail to pick up on this.  So we saw lots of gold, yellow and red shinning through the fashion on show.  There were even some exotic over the top head dresses on show.

It is so great to see celebrities and fashionistas alike taking some risks with their clothing and it was a real treat to see most of the fashion on show.  There were of course one or two that really missed the mark.  I really did not  like what Madonna chose to wear (even if it was plugging her latest album) but enough about what was not great. Here are my top looks from the night in no particular order.

Sarah Jessica Parker was once again a stand out and this is the one event of the year that she never fails to impress and takes risks that many other celebrities would shy away from.

Wearing a custom made H&M gown and a stunning Phillip Treacy head dress she embraced the theme and took it to another level.  This was a real homage to China and a great choice for her.

And then there was Kate Hudson who was a delight in her custom made Michael Kors gold gown.  With hair and make up that gave a level of old world elegance this was a stunning look on the red carpet.

Katie Holmes arrived with Zac Posen, wearing a Zac Posen gown and it was a aperfect choice for her frame, showing off her beauty, her elegance and was just a little playful, with the clouds embellished all around the bottom of the dress. 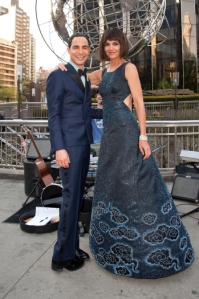 Anne Hathaway is another star who really knows how to work a red carpet and this was no exception.  In a gold hooded Ralph Lauren gown she shimmered with every step she took down the red carpet. 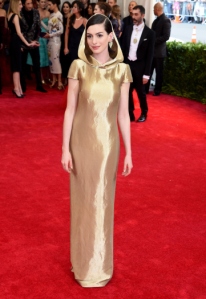 And then we had Selena Gomez in Vera Wang.  This was sheer perfection and a step away from others on the red carpet as it was all white with some black accents around the top of the dress.  Topped off with perfect make up this was a stunning look for the night.

Following on from last years stoush in the lift, Salonge Knowles pushed ahead with an inspired dress by Giles that was all about form colour and offered a short dress option that was delightful to behold.

Event Co-chair Jennifer Lawrence chose Dior and topped it with a stunning diamond necklace. Following a trend on the night she also arrived with her hair up and it really accentuated the beautiful make up that just added to the perfect look.

Even thought the men attending did not really go to town with the theme for their looks (they never really seem to do that, unless you are someone like Jared Leto who does not go with red carpet formality at the best of times). Ansel Elgort was a stand out in his simple Tom Ford Tux simply stylish from head to toe. 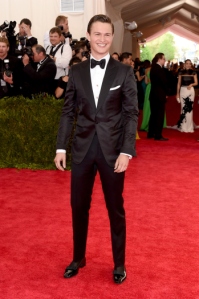 Lizzie Caplan was stunning in Donna Karan Atelier.  This soft pink dress with shiny diamond embellishments was again off trend compared to many of the other stars in attendance but it was a really beautiful addition to the looks on the red carpet.

And finally there was Rhiannon who made a grand entrance in a gold cape by Chinese designer Guo Pei.  This really got the cameras clicking and was a stunning way to enter the event and work the red carpet.

This was a great night for fashion and the real winners were the amazing Chinese designers that were on show!